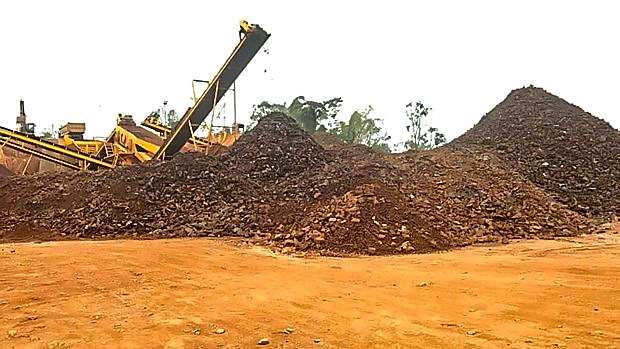 According to RFA, a Chinese company has signed an agreement with the Xaysomboun province in central Laos to begin preliminary studies for iron mining operations, raising concerns among villagers and environmentalists about contaminated rivers and fields.
An official from the provincial Energy and Mines Department told RFA’s Lao Service Tuesday that the province and the Tai Xan Meng Sino-Lao Minerals Corporation signed a Memorandum of Understanding (MoU) on Feb. 11 that enables the company to conduct feasibility studies in Xaysomboun’s Anouvong district.
Over the last two years, the province of Xaysomboun, founded in 2013, has been a common target for foreign mining companies. Around a dozen, such companies have been granted permission by provincial authorities and the Lao central government to investigate the possibility of mining operations during that period.
“Xaysomboun is a new province and it is poor, but rich in natural resources, especially from mining. It is in need of development,” an official of the Xaysomboun Administration Office told RFA on Jan. 28.
“At least 10 proposed projects have been granted the right to perform feasibility studies since 2019. That’s just for the feasibility study, not for exploitation yet. If any project is found to be infeasible, it will be abandoned,” the official said.
Although companies applaud the province’s desire to attract international investment, local citizens are concerned about how mining has impacted their lives over time and have taken a stand against new iron mining projects.
“The exploration and exploitation will destroy nature, especially in the forest, the habitat of a lot of species,” a worker from an international environmental advocacy organization, who requested both individual and organizational anonymity to speak freely, told RFA.
“For example, blasting activity kills or displaces wildlife in its vicinity. Additionally, the noise and dust created by exploration are detrimental to the health of local residents, especially when we consider particulate matter created by explosions. It will have a silent, but gravely harmful effect,” the environmental advocate said.
Despite the fact that developers typically sign agreements to protect livelihoods and the environment, the environmental advocate claims that the impacted communities suffer in reality. According to the source, provincial authorities never assess particulate matter levels, and residents living near the mining activity often suffer from respiratory problems.
A resident of Nam Yon village in Anouvong district, the province’s most heavily mined town, told RFA that life near the mines was smelly and noisy.
“The smell of chemicals is so bad, it smells like sewage, and it is so pervasive in the evening,” the resident said.
“We hear very loud explosions every day. It’s so loud and strong that it shatters the glass in our windows and shakes up metal gates and our homes,” the resident said.
Another Nam Yon villager told RFA that river pollution was a problem for her.
“They use chemicals that eventually flow into the river. We are now too afraid to eat the fish, shrimp or crabs from the river. Most of us here don’t have jobs, so we live off the forest and the river as our only food sources,” she said.
“My home was once damaged by an explosion. The project developer came to see the damage but did nothing to fix it. I had to make repairs myself,” she added.
Since September, Vietnam’s Look Yao Company has been pursuing gold mining possibilities in Xaysomboun as part of a separate mining project. The mine will be in the Longchaen district, near Namxan village.
The hopeful miners, according to a village resident, have compromised village life.
“Their trucks run through the village, damaging roads, hitting cows and creating dust. They never repair the damage,” the Namxan villager said.
According to a representative from the province’s Energy and Mines Department, the Tai Xan Meng project would have minimal environmental effects.
“They signed the initial contract to explore the iron mine, not to exploit it yet. This is just the first phase. Anyway, the iron ore is far away from the villages and not near the river. If it were close, we would not give permission,” the orifical said.
Xaysomboun has committed to exploration rights for four separate projects since 2019, according to the department’s report to the provincial people’s council late last year.
According to the most recent MoU, Tai Xan Meng will explore 102 square kilometers (40 square miles) in the Anouvong district. The Lao Kalongdepo Company is exploring a 177-square-kilometer region as part of the second project.
The third project is a 234-square-kilometer exploration project in Longhaeng district, a joint venture among the Lao Defense Ministry and Joe Bounmy Minerals Corporation. ZY Mineral Processing Corporation is pursuing a fourth project in an unspecified field.
Aside from the Vietnamese gold mining initiative, Phu Bia Mining, backed by Australia, has been running gold mines in Xaysomboun since 2006.
The remaining schemes are on a smaller scale and are funded by Chinese firms.
According to a representative from the Xaysomboun Agriculture and Forestry Department, the developers must all protect the environment.
“During these explorations, the project owners must protect the environment. For example, if they cut down trees to clear the forest for an access road, they must pay for replanting and reforestation,” the official told RFA.
At a parliament meeting in November, Souanesavanh Viyaket, the Lao National Assembly secretary, said that companies with concessions should strictly follow their contracts and local law to protect the environment, biodiversity, and livelihoods.
Land concessions to China, Thailand, and Vietnam for natural resources such as timber, agricultural products, minerals, and oil have fueled Laos’ recent economic development. However, the policies have ignited controversy over land taken without adequate compensation and environmental pollution.
In Laos, land grabs and the exploitation of public property for the benefit of foreign and domestic corporations are normal, and villagers affected by them are always afraid of retaliation if they speak out publicly.