Drones and automation are two of the most often used terms in the mining business, and with good reason. Miners look farther and farther to find mineral deposits to feed the world's insatiable appetite for commodities and are interested in both of these technologies. Australia is emerging as a leading epicenter of autonomous technology and research, while the former's mapping and information-gathering potential appeal to miners. 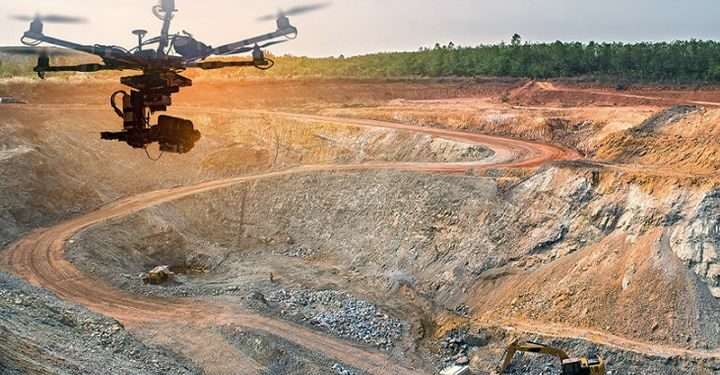 There may be a tipping point in mining when these technologies become established and well-entrenched in the sector, particularly in the exploratory area. For example, in isolated areas where human populations and development are few or hard to reach by foot, a drone doing mineral evaluations is appealing.

However, technical and human obstacles remain, with the drones themselves an unsatisfactory solution, and the idea of replacing human employees with intelligent robots a frightening precedent for the future of mining. Can the exploratory potential of drones be realized despite these challenges?  Using drones in exploration is a no-brainer since they provide a way to record vast swaths of the environment from tremendous heights and in very distant locales. However, orthoimagery; a uniform-scale image where corrections have been made for feature displacements such as building tilt and scale variations caused by terrain relief, sensor geometry, and camera tilt. It provides a considerably more detailed representation of an area than just photographing it.

Images taken by the drone are encoded with telemetry, including the image sensor’s location at the moment of capture.  As a result, miners can inspect and analyze possible mining sites in more depth than mere pictures, enabling them to plan the breadth and scale of mining operations before they begin. According to Murphy, it also minimizes the distorting influence of topography and environmental characteristics, which may frequently interfere with planning.

Post-processing uses ground survey points and topographic data to correct, combine spatially nearby photos, or ortho-rectify so that measurements collected from the photo mosaic or set of shots are consistent. ‘ It is possible to estimate distances across the picture with great precision since each pixel represents a fixed quantity of space.  In the long run, photographs of the landscape are also helpful. For decades after a mine is created, miners may utilize its intricacy as the foundation for environmental rehabilitation, allowing them to return to the environment as it was before the mine ever existed.

Having a picture or a set of images of the ground surface before disruption is a good idea for customers since it is part of the permission that you are obligated to restore the land after mining has finished 20 to 40 [or] whatever the number of years.  The government agency will order the corporation to return and restore the property to its pre-disturbance state to have a historical map or a tremendous ortho-mosaic showing.

Murphy said that there will always be an essential role for people in mapping and exploration, contrary to the apocalyptic predictions about intelligent robots displacing human employment.

Anytime a drill rig or haul truck has an issue, a human person is needed to watch it, even if it’s only to keep an eye on it as a monitoring device for the system.

It’s not that employment will disappear in mining exploration; instead, they will shift from being based on the direct operation of cameras and soil sample equipment to the direct supervision of a drone’s operation.